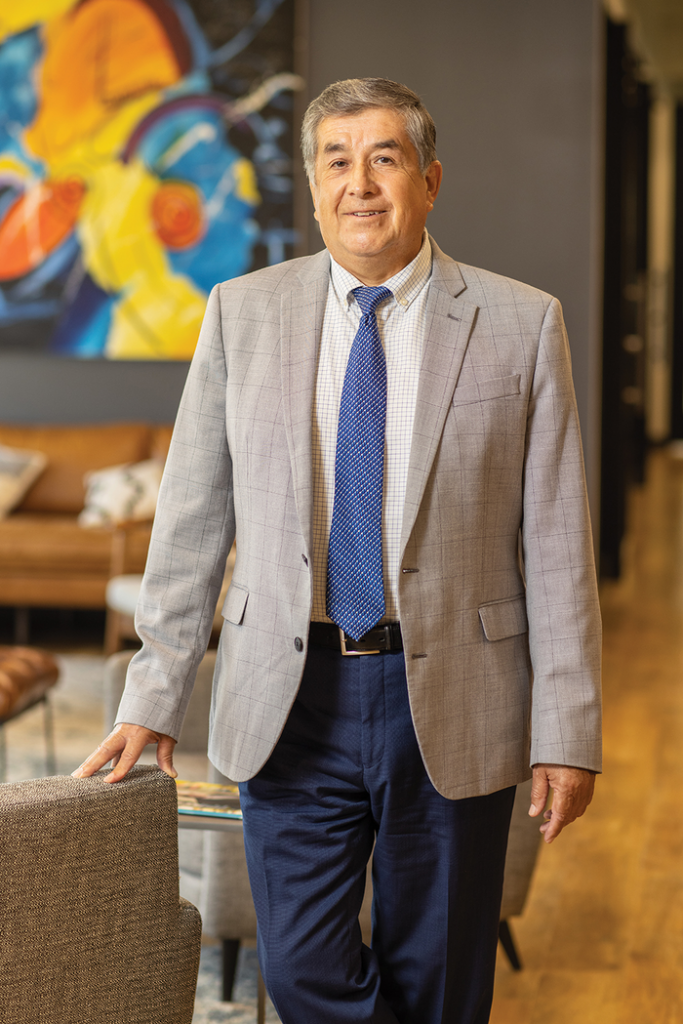 Prof. Carlos Roncal was recently interviewed by Frisco Style Magazine, a prestigious North-Dallas Magazine. The following text is an interview by Amy Richmond.

Decades ago, in La Paz, Bolivia, a second-grade teacher who wanted the best education possible for her then-10-year-old son enrolled him in Saint Andrew’s School, an International Baccalaureate school. This decision by his mother became one of many that set Professor Carlos Roncal on a path he could never have imagined.

A longtime Frisco resident, Professor Roncal is the founder and principal of Frisco International School, a global private school that began holding classes in 2019. According to its website, the school’s mission “is to prepare young people to become citizens of the world by understanding different languages, cultures and people” so that they may hopefully attend the world’s best universities and one day “become top professionals and world citizens.”

Recalling his own education in Bolivia, Professor Roncal says, “My friends at school were the sons and daughters of the ambassadors from Peru, the United States, Chile, Britain … different parts of the world. I used to go to birthday parties at the American Embassy.”

Half of the school was taught in English and the other half in Spanish, he says. “We had very good teachers. We lived in a poor country, so they would send volunteers from other countries – from England, from Germany, the United States, Canada – so I was very lucky and blessed to have these teachers.”

Each instructor influenced Professor Roncal differently. For example, he says a physics teacher from Germany influenced his interest in languages, and nuns from Canada wanted him to sing in English at church. Meanwhile, the head of the school’s band hailed from Britain.

“He was teaching us how to march (in) British style,” Professor Roncal says. “He was a guard in the Queen’s court, so he volunteered to come down to Bolivia for a year and teach us.”

As a student, Professor Roncal became immersed in a microcosm of languages and cultures. As a result, he was perhaps a bit more prepared for the geographic and cultural changes that accompanied his family’s move from Bolivia to St. Louis, where he studied at a private Catholic high school.

After high school, he attended the University of Missouri, where a presentation about international careers by representatives of the Thunderbird School of Global Management caught his attention.

After finishing his bachelor’s degree at the University of Missouri and spending a year teaching at a private school, he went on to earn a master’s degree from the Thunderbird School of Global Management. “By then, I spoke English, Spanish and Portuguese,” Professor Roncal says. He was recruited by Kleenex®, a division of the Kimberly-Clark Corporation, which “sent me to Brazil right away. … I was their international financial analyst.”

After several years there, he went to work for a smaller international company, and later found himself in Florida, where he says he worked with the Australian and U.S. Navies as a pricing analyst during the 1980s. “I had to get top-secret clearance,” he says, and had to obtain his U.S. citizenship.

When he realized the potential for receiving a promotion was limited due to his lack of military experience, he turned to his favorite newspaper, The Dallas Morning News, to direct his next path. A job listing in the paper brought him to Dallas 22 years ago.

Once living in North Texas, he began asking around about which areas had the best school districts. He learned of Frisco ISD’s excellent reputation and decided to move to one of the city’s new subdivisions. Back then, sections of Eldorado Parkway were still dirt roads.

Professor Roncal has resided in Frisco for two decades. During that time, he says he has been a member of the Frisco Chamber of Commerce. “There is a very good understanding and working relationship between schools, companies and government,” he says. “I haven’t seen it anywhere else.”

As his career took him from working in international business to teaching high school within numerous school districts to eventually becoming a professor at the University of Phoenix, he took notice of the power of language. “Once you learn the language,” he explains, “you can read (about a culture’s) history; you can read their poetry; you can listen to their music. It opens up your eyes so much more.”

“When we teach a language, we don’t just teach the speech. We teach the culture behind it, and the music behind it, and the contributions that language or region of the world has [had],” he explains. In the years since, World Language School’s clients have included Montessori schools, area private schools, homeschool students and others.

One of its initial courses taught English to employees of a hotel in Columbia, he recalls, as well as police and army forces that were protecting the surrounding area from guerilla fighters.

In 2019, things came full circle for Professor Roncal when he opened a second World Language School in Bolivia. “It’s mainly university students,” he says of its student body. “In Latin-speaking countries, in order to get a bachelor’s degree, you pretty much have to speak English. So, you have to really, really study English, otherwise you can’t graduate.”

Professor Roncal, who in 2019 completed Texas’ School Principal Certification course at Lamar University, continues to expand his vision for his latest school, Frisco International School, which is an option for students who are in search of “an international education,” he says. Some of its curriculum utilizes World Language School’s classes.

“There’s a need for education to be more than just at the regional level,” he explains. “We want our students to be internationally minded. … We want our teachers to find the creativity in our students.”

In fact, it was the creativity and artistic talents of a 16-year-old student that Professor Roncal says resulted in Frisco International School’s logo, which was drawn by the student. “I wanted the world (depicted), of course,” he says. “I wanted … the olive branches surrounding the world, and I wanted a rising sun … to signify the rising of the new 21st-century generation to look at the world as a place, not just different regions or countries.”

Frisco International School boasts a year-round schedule and is based on the 21st Century Model, which he describes as “a brilliant total redesign” of the traditional school system. The model emphasizes problem-solving, creativity, communication and collaboration, among other critical skills.

Once his dreams for the school are fully realized, Professor Roncal says he plans to write a book entitled 50 Years of Living the American Dream. For now, he’s happy to share advice for others who are pursuing the American dream. “Keeping our American values is very important. Have integrity. Follow your dream, whatever it is,” he says. “Our country is a country of opportunity. Work hard. … Be a life-long learner.” Finally, “If you want to be a leader, be a servant leader.”

Amy Richmond is a writer who relishes faith, family, intriguing conversations, and inspiring words. She wishes time could be saved in a bottle, because one lifetime isn’t enough.